IHC 2018 YEAR IN REVIEW: The Year of the Phoenix – IHEARTCOMIX

IHC 2018 YEAR IN REVIEW: The Year of the Phoenix

IHC 2018 YEAR IN REVIEW: The Year of the Phoenix

The end was near.

That’s how 2018 started for IHC. No joke. It’s hard to believe after the year we’ve had, but that’s the truth. It had already been a rocky few years prior, always on the brink as we weaved our way through our cultural and business pivot.

Since 2015 we’d been evolving out of where IHC started when she was born in 2004. In 2016 we settled on a direction and fumbled as we tried to figure out how to become an agency. In 2017 we landed, but not on our feet, more our knees. We knew what we wanted to do, but no one was letting us do it. That whole year was desperate, agonizing and stressful. I got so tired of people telling us no that eventually I bet everything on someone saying yes. I knew we were capable of so much more and it was up to us to demand it. So we did and… nothing.

December of 2017 was a desolate place in some regards. The couple jobs we booked fell through and we were running out of money quick. We were deep in the midst of planning the second year of LA Gives Back, our annual Los Angeles homeless benefit, and don’t think the irony didn’t hit us. When all was said and done we’d raised $62,000 for charity and not a dime for ourselves (which was the point). We were so broke the jokes were flying that the event was paying for the very organizations we’d soon need to use ourselves.

Despite the success of LAGB2, I was starting to feel pretty down. The big bet wasn’t paying off and best case we’d be hobbling along from one job that barely kept us alive and underused us to the next. That not only felt like a waste of time, but also took us away from our own creative ideas, eaten up by effort needed for survival. It was a downward spiral of misery and I was about ready to give up.

We ended 2017 with a staff meeting right before the holiday break where I laid out that IHC could be over soon. I told everyone that we were gonna give it a go, but within the first couple months we will know and that they should be prepared to get new jobs. Like I said, the end was near.

And then it wasn’t.

I didn’t know for sure, because I really had no clue, but I KNEW we were doing the right thing. We didn’t change and work our asses off because it made sense, we did it because it was what felt RIGHT. A lot of people called us crazy and laughed at the juvenile thought of going from promoting DIY music events to being a creative agency working with film, music and brands, but this was the stuff we LOVED to do and the things we LOVE to talk about. Why be the service for someone else’s idea when you can BE the idea. There was a strength to being pushed to such extremes to speak up and be louder and even more so when people started listening.

The year started like a shotgun bang as we got into the movie business! We went to Sundance, scraped together a couple events for Skate Kitchen, one of which featured Diplo and Usher,  and simultaneously we were landing our first deal with Marvel Studios / Disney for mother fucking cultural phenomenon Black Panther.

We came up with an idea called the Taste of Wakanda, which imagined what the food and culture of the fictional nation of Wakanda could be like. We partnered with Bronx based chef collective Ghetto Gastro to figure it out and documented their process as a content series. The whole thing climaxed at a New York Fashion Week event with the cast where we served them the food and celebrated the movie. OK THINGS WERE DIFFERENT.

From there things got even weirder. Skate Kitchen turned into a whole campaign collaborating with Magnolia Pictures and brainstorming every day with its brilliant Director Crystal Moselle. We helped build the cultural relevance of the film with marketing ideas, brand partnerships and experiential events. This film is now being turned into a TV show on HBO.

Then, there was the continuation of Lights’ award winning Skin&Earth saga, which we developed into a graphic novel this year and brought to San Diego Comic Con (where it was announced it’s being developed into a TV show).

Right around this time we were working with Ninja Tune on a couple Coachella events. Adult Swim too, who we partnered with on several events and marketing stunts throughout the year, including their first ever festival. Speaking of which, 2018 was our third year collaborating on FORM Arcosanti bringing in brand partners and generally making cool things happen at one of the most forward thinking festivals in the world.

But the movie business wasn’t done with us. Marvel Studios / Disney brought us back for a couple projects on Ant-Man & The Wasp, one of which took me on a 5-day vacation to Disney World and the other allowed us to create inventive special effects videos with some of the top talent on instagram. That was followed up by joining the campaign for the award winning M.I.A. documentary MATANGI / MAYA / M.I.A., which combined several of our worlds (and history) at once. We also squeaked in productions for Ready Player One (imagined an experience), Blumhouse’s Truth or Dare (where we built a fake escape room and turned it into a prank video) and collaborated at Los Angeles Comic Con with Tenacious D for their new album Post Apocalypto.

And let’s not forget the honor of producing a dance video series for Mary Poppins Returns, our third outing with Disney for 2018 (we were also THIS close to working on Avengers: Infinity War…)!

I know that sounds like a lot, but that was maybe just half of our year….

The end of 2018 was eaten up largely by Pabst (you know, the beer). We helped them imagine their rebranding for 2019 (and beyond), by producing a 13-city experiential roadshow that brought the future of the brand directly to their distributors nationwide. It was the biggest job we’d had to date and completely nailed it. It’s not as sexy as BLACK PANTHER, but did you know we were capable of that?

Even with all the agency projects, we still managed to do a ton of our own creative work, because at the end of the day, that’s why we do what we do. We’re artists. We love making things, and while it has been the world of all honors to be creative with the folks we’ve worked with this year, it’s our own ideas that fuel our long term goals.

2018 saw us release three new IHC 1NFINITY releases, our record label with a shared music video universe, from Chela feat Banoffee, Lil Gnar and VenessaMichaels. We even did a screening of all eight of our cinematic videos to a packed house. Mainly, 2018 saw us do a TON of behind-the-scenes work on 1NFINITY, signing artists, locking in new deals and setting up a strategy for 2019 that will take our high concept label in exciting new directions, especially as our world collides with film more and more.

We also worked a lot of our cast of cartoon characters, whom we are now calling LOST DAZE. 2019 is gonna be a big year for these guys as we’ve already created a comic book with Luke McGarry and produced a photo shoot with the incredible Parker Day, bringing the characters to life in the real world. Both dream artists to work with and both of these projects will be making an appearance soon.

In 2018 we mastered the art of the playlist, creating around 20 new ones, all great and all available on Spotify and Apple Music. Our characters host these, tying the worlds of IHC between our taste and creativity.

Finally, we wrapped up 2018 producing our 3rd annual charity event LA GIVES BACK 3. The community driven series focuses on fighting the Los Angeles homeless crisis. We partnered with a ton of our favorite people in LA for an event (Brownies & Lemonade, Emo Nite, Ninja Tune, Mad Decent, Restless NItes, Adult Swim, Late Night Laggers) and online auction (Seth Rogen, Shepard Fairey, Eric Andre, Poppy, Mac DeMarco, SIMONE, Grumpy Cat and tons more) that raised close to $76,000 for Downtown Women’s Center and My Friend’s Place. It was a true holiday miracle, even if you have to deal with Death Metal Santa the whole time. 😈 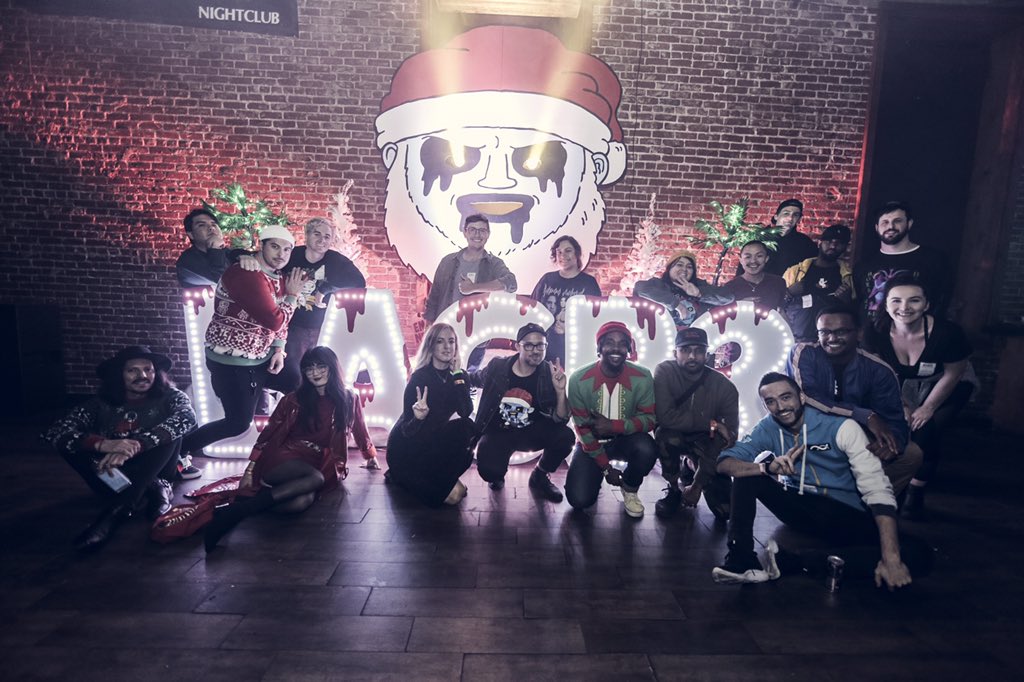 To wrap things up…

It’s cool that we got to do all this stuff and it says a lot about the direction IHC is growing in. It almost feels like we finally figured it out. No longer a blind painter or a mute politician, our myriad of interests and experience eventually dovetailed into each other creating something new: Our future.

We discovered a niche that is ours, and with it, a wide chasm in the industrie(s) unique to us. Somehow all the fuck ups and ping ponging mixed into who we were always meant to be. I don’t know if it’s us growing, the world catching up to us, or probably a mixture of both, but it’s weird and smells like a new car even though it looks like a clunker on the outside. It’s ok, we’re getting there and that new coat of paint is definitely on the list for 2019.

2018 was also about learning and seeing beyond the mistakes of the past. We got to sit in rooms with some of the best minds in the business and see how they think about communicating some of the largest properties in the world. Then we got to take all that knowledge and apply it to ourselves and other projects we believed in. Combined with scrappier abilities, it became very powerful tools.

One of the things that I’m proudest of in 2018 was that diversity and inclusion were on the forefront of everything IHC did. Women fronted or led projects dominated our year while a wide range of creators and projects stole our hearts. Let me be clear about one thing though, we did not support these projects solely because of the talented women and diverse people behind them, we supported them because they were best projects. This year more than ever gleaned true with the inclusiveness of who we are, but for us, this is who we’ve always been. We are here to support great ideas. That is the IHC way.

Some highlighted themes for us across everything we did in 2018 included:

So what’s next? Well 2019 is our 15th anniversary. IHC began in January of 2004. Here we are in January of 2019. It’s a little crazy to think about. We’ll be building on the success of 2018 and also will be creating a few celebratory moments throughout the year. We have a lot of original content to share. Hopefully you’ll like it.

It’s up to us to show both ourselves and the world that 2018 wasn’t a fluke or dumb luck. I want to believe that we earned it after years of hard work, but I want 2019 to PROVE that. Then we’re gonna have to keep proving it. Success (or the lure of it) is just another form of survival and we are still quite a ways off from being in a truly great place. However, we are becoming who we were always meant to be and now we get the privilege of waking up everyday and doing it. Thank you to everyone who has given us the opportunity to do so and to all the amazing folks at IHC that have contributed so much to getting us here.